From the desk of the BASSET NOSEY NEWS, your Editor will attempt to send the latest words of wisdom, the SHOW and FIELD TRIAL happenings AND just a few notes from memories participatiang in a sport.  This NOSEY NEWS is for your convenience, information and for your pleasure, and not speaking for the BHCSAC, its Officers or Directors.

The BHCSAC through the years have had a some club members who were above and beyond on participation not only in the local club but in the national BHCA parent club.  History is part of the club and should not be forgotten and should be passed on to the future members of the club.  History is not bragging or blowing a horn, but part of the success and progress of all clubs as the history made the club.

DID YOU KNOW: As many know the BHCA approved a new FORTY (40) YEAR MEMBERSHIP pin to their members who have achieved that many years of membership in the BHCA. This award was backdated for those who already reached the 40 year status. In Northern California we have 5 long time BHCA members who received their 40 year pin, RUTH BALLADONE, MARIANNE PAULLSON, (50yrs) DIANE RINDERNECK, JOANI RUSH and JERRY RUSH. The 50 years pin is not too far off.

DID YOU KNOW: Our BHCSAC did not always hold our specialty shows at CAL EXPO, prior to the CAL EXPO days we held shows at the very nice ELK GROVE PARK which was a favorite spot. The The first specialty location for many years for the club was at the OLD SACRAMENTO FAIRGROUNDS on Stockton Blvd which is now the UC DAVIS HOSPITAL

DID YOU KNOW: The first FT activity in BHCSAC reported by Diane, Our first licensed trial was March 1981. Prior to that we were required to hold 3 qualifying trials and those began late in March 1979.

DID YOU KNOW: The largest regular BHCSAC and NCBHC entries were 97 and that did not count sweepstakes. The two clubs worked together and held specialty shows in Sacramento with the working together of Jim Dok and Bob Dunn (NCBHC) and Jerry Rush (BHCSAC) to make it a first time specialty of the two clubs together at the same location,

PROGRESS IN FT EVENTS: Patti and Gary Palmer have been instrumental in the growth of FT in California by getting interest in the BHC of S CA. and San Diego club to begin holding FT events for those interested and able to participate. That is also part of the expansion of FT events in the West. Club members Bud and Diane Rindereneck and Linda Deir were the mainstream in starting FT events in the BHCSAC. This is history and also the present growth. Congratulations to those pioneers and those carrying on the torch for the growth and expansion of the FT event in the West.

DID YOU KNOW: The Sacramento area had two BHCA NATIONALS, the first in 1977 actually held at the Roseville Fairgrounds and then at the DOUBLETREE in Sacramento 1998. California had one other BHCA NATIONALS in SAN DIEGO, 1993. Diane was FT chairman for the 1977, 1993 and 1998 Nationals in California. Joani was the Hospitality Chair for 1998, Raffle Chair for 1977, Annual Dinner for the 2009 Nationals and was part of Mike Sosne ring steward crew for 1993 BHCA nationals. Jerry was the 1998 National Coordinator. Patti Palmer was FT chair for the WA. 2009 nationals.
DID YOU KNOW:  The FIRST BHCA TALLY HO EDITOR was a Charter member of the BHC OF SACRAMENTO.  RUTH TURNER was the first TH Editor starting with the first TH Jan/Feb issue in 1960.  Ruth served as editor through 1961.  She served as a BHCA Director 1966-1967.
Posted by BHCS at 8:59 AM 3 comments:

Are you and your basset ready to hit the trails? The Basset Hound Club of Sacramento will be holding their semi-annual Field Trials this fall in Lagoon Valley (Vacaville), November 16/17th 2012. These spring trials include multiple events that allow your basset to showcase its tracking skills and see how its nose ranks among the other top hounds in Northern California. 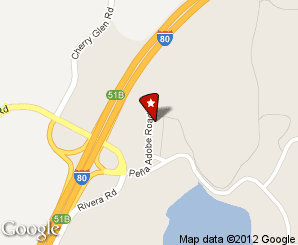 (click the map for directions to Lagoon Valley)
Posted by BHCS at 9:22 AM No comments: